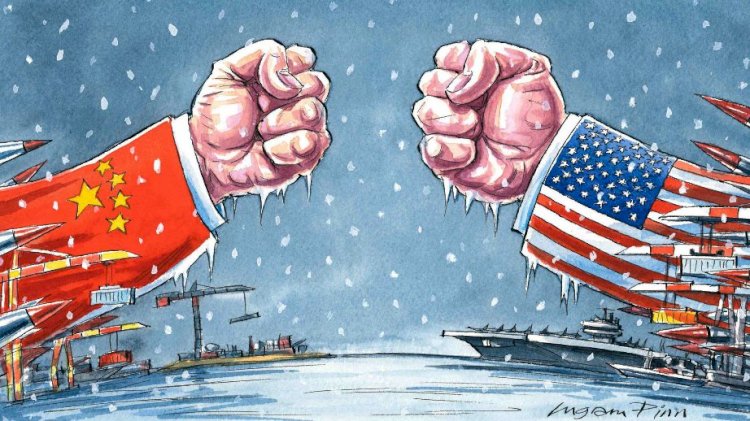 The escalating tension in Taiwan is reminiscent of the pre-war situation in Ukraine. Provocative moves are coming from the USA; China conducts military drills one after another. Taiwan claims that “China is preparing to invade” and the missiles fired by the Chinese army pass over Taiwan… It is a fact that the crisis of the imperialist system has brought the world closer to a global nuclear war.

A Quick Reminder of Recent History

We saw in Georgia that the US strategy of containment of Russia led to wars. In 2004, there was a regime change in Georgia as part of the color revolutions. Eduard Shevardnadze, the former USSR Minister of Foreign Affairs, who was at the top of global diplomacy and kept the delicate balances in mind, was removed from power and replaced by pro-US Mikhail Saakashvili, who was nothing more than a charlatan. Clearly, Putin would not forgive this regime change in Tbilisi, and Georgia was riddled with thorny national problems that allowed foreign intervention. When Saakashvili, who was promoted by the USA and played with nationalism, sent an army to separatist South Ossetia in 2008, the Russian military dealt a heavy blow to weak Georgia.

In 2014, there was also a color revolution in Kyiv (Euromaidan), and pro-Russian Viktor Yanukovych was overthrown from power. The new Kyiv regime was nationalist, anti-Russian, and fast-paced NATO. But the people living in eastern and southern Ukraine had strong cultural and historical ties with Russia. As a result, Crimea passed to Russia easily. In Donbas and other cities, protests against Euromaidan turned into bloody clashes and civil war. Putin made his move here as well, helping the separatists to hold on in Donbas. Since then, the new regime in Kyiv has gone through a nationalist reconstruction to reclaim its lost lands, strengthened its army, and prepared for war. On the other hand, Ukraine has pressed for membership in NATO. You know the rest…

Tension over Taiwan, Siege in Asia-Pacific

Everybody knows that the main problem of US imperialism is China. The USA may still be the world's only superpower, but it is declining. There is another superpower candidate in the middle. As China made a breakthrough economically and militarily, it exceeded its limits. This rise pushes the imperialist hierarchy to change. While China is making strategic moves to turn from being a regional player into a global power, the US is concerned to prevent China from turning into a superpower by besieging China militarily, economically and politically.

Taiwan can be a boon for the USA in this regard. Nancy Pelosi's provocative Taiwan trip gives us clues in this regard. Those who are presenting this visit as a personal and random business trip should not be taken seriously. Pelosi is one of the top figures of the US state apparatus. And the recent Taiwan visit is very much in line with the periodic trends of US imperialist politics. The US/NATO have demonstrated their willingness to proxy warfare with the almost unlimited military and monetary support they have offered to Ukraine. It is none other than the role assigned to Taiwan. So, Biden's  “That’s her decision” statement is just an effort to run a false flag operation.

We have been following for a long time that the US ruling class is united in the anti-Chinese hawkish policy. On the other hand, the United States had tried to bring Russia closer to itself before. This was the central policy of the Trump era. The old tactic of the USA... We are talking about the effort to show the USA as the right partner by showing the asymmetrical superiority of China to Russia. In 1971, the USA succeeded in attracting Maoist China against the USSR. But this time it didn't. Putin's self-confidence had skyrocketed with his recent successes, and there were irreversible problems, such as NATO's expansion into Eastern Europe, and Ukraine. Therefore, it was not possible to drive Russia away from China.

Nowadays, Taiwan is like bait on a hook. It is not known whether China will dare to invade the island, but the countries of the region have already aligned with the USA in fear. Apart from Taiwan, countries such as Japan, South Korea, Vietnam, Philippines, Malaysia, Indonesia, and Brunei are in conflict with China over their maritime borders. When we add India and Australia to this list, a broad coalition under the leadership of the USA emerges. That is the limit of the US siege in Asia-Pacific.

NATO has been expanding eastward since 1999. Finally, with the participation of Finland and Sweden, NATO reached the strategic and conflicted region in the Arctic north. On the other hand, the US-led NATO does not hide that it sees China as the primary threat.

NATO's long-standing plan to contain Russia and China naturally shapes a China-Russia-Iran-North Korea bloc. The Ukraine War raises the long-standing affinity between these states to the level of "strategic partnership". Conversely, the USA strongly consolidated its leadership. The US already had ardent adherents in Eastern Europe, but now Western Europe has had to definitively accept US leadership. China's aggressive foreign policy under Xi Jinping made the US leadership indisputable in the Asia Pacific. Thus, the tendencies of bipolarity in the global imperialist competition became evident. So we can claim a historical development.

Is a Global Nuclear War Coming?

The question is whether this bipolarity will lead to a new world war. For now, the Ukraine War continues as a proxy war. The USA is waging its own war over Ukraine. What about in Taiwan? Biden, during his visit to Japan last May, stated that they would defend Taiwan in case of a possible Chinese attack. This could of course be a bluff. The US may well be content to see Taiwan, like Ukraine, as its proxy fighter.

The fact that Taiwan is an island in a possible Chinese invasion attempt will make military strategies completely different. Landing and occupying the island, on the one hand, is a very risky business for the aggressor. On the other hand, when the Chinese military blockades Taiwan from the air and sea, it will be extraordinarily difficult for Taiwan to stand alone for a long. Ukraine has very long land borders with NATO countries. Ukraine is able to continue its war against Russia thanks to these supply routes. Russia could not achieve absolute air superiority, and could not prevent the entry of weapons from Poland. However, if China clogs Taiwan's lifeblood, the course of the war could be different. What will the US do in this situation? Will the US come to Taiwan's aid, as Biden promised in May?

There may be no invasion of Taiwan. In fact, China has put forward large-scale exercises around Taiwan, crossing the Taiwan Strait and even flying missiles over Taiwan as a new military-political-psychological border. Therefore, it may find it more appropriate for its own interests to continue its economic and military breakthroughs and delay the risks of world war until a time when it is more ready. But while China strengthens its army with great speed, the countries in the region are not sitting idle. Countries such as India, Australia, Vietnam, Japan, and South Korea are rapidly modernizing their armies. All know that Taiwan has been preparing for war for many years, and from now on, it will do its best to acquire more advanced weapons.

All this shows that all the people of the world are sitting on a nuclear time bomb. It is clear that we live in more dangerous times than in the US-USSR nuclear tensions. At that time, the given world status quo had its own stability. But the real issue today is that the imperialist status quo is being forced to change. This pain undoubtedly makes the world a more unstable and dangerous place.

There is no factor that can save our world, except that the working class and youth raise the struggle against their own ruling classes under the banner of revolutionary socialism. The rise of a leading Marxist power among the workers who have risen and will rise in the coming period in countries such as Sri Lanka, Ecuador, and Panama stands before us as our only option. We have no other choice but to raise struggle for this tradition to take root among the working class and youth of Turkey, which is experiencing a severe economic crisis like the whole world.

Two statements from the oil company contract and permanent...