Haft Tappeh Workes are on the strike again to prevent the closure of the factory and demand their wages. Iranian regime campaigns against the factory management which currently on trial for fraud 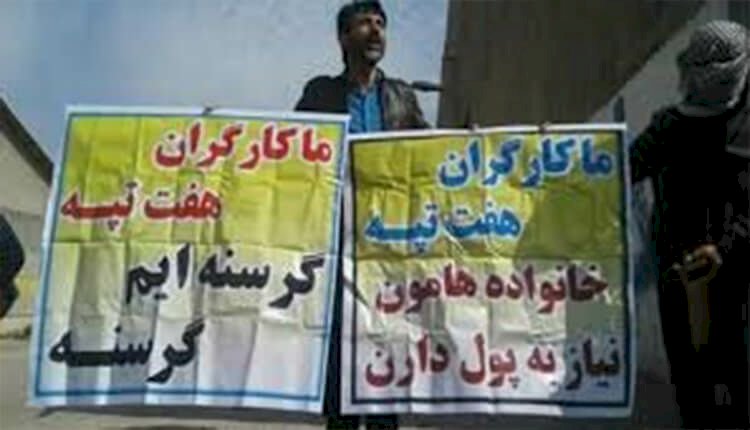 "We the Haft Tappeh workers, we are hungry!"

In Ahvaz region of Iran, workers in the Haft Tappeh sugar cane factory started a strike again on June 15.

Haft Tappeh workers have been struggling against privatization, layoff and impoverishment policies for years. Workers started another strike on June 15 after the Iranian regime made its move against Haft Tappeh workers last week.

It’s been claimed that the prosecution launched against the managers of the factory is an excuse to close the factory. By this, regime targets to close the factory by privatization and disperse the worker assembly  in which thousands of worker organized and fights radically. In this fight, sugar agricultur workers support the struggle of the Haft Tappeh.

The statement of the union of the Haft Tappeh workers is as follows:

“Those who want hypocritical justice and their social media trolls cannot prevent the demands of the workers! Whenever Haft Tappeh workers demanded their rights until now, they made counter propaganda with all the media. They made news that denied the struggle in the factory. Now they are publishing news claiming that the factory is on holiday (that the production stopped).

Workers have not been paid for 3 months, but regime media still do not learn from the struggle and resistance of Haft Tappeh workers.

Let them know that the Haft Tappeh workers have been able to grasp all the tactics of the regime and continue their struggles since the first day they started fighting. They will also continue to struggle and will not give up their demands.

The workers will not allow the factory to be closed and its assets to be divided (to be privatized) among the capitalists.

Workers are not hopeless. They invite all workers to this struggle to defend their rights. Workers will resist the abolishment of Haft Tappeh.”

Despite all the pressure of the regime against the workers' movement in Iran, the Haft Tappeh workers actually perform the union organization and play a leading role in the Iranian working class. This experience of struggle is also important for the working people of the Middle East.

The previous struggles of the Haft Tappeh workers also made an impact and their leaders Esmaeil Bakhshi and many workers were arrested and punished.

Haft Tappeh workers are one of the most prominent struggles among others such as Tehran bus union (Vahed) workers, Ahvaz steel workers, teachers, pensioners. And together with the Vahed union, it represents the organized fractions of this struggle.

With the Covid-19 outbreak in recent months, Iranian laborers suffered severe poverty as a result of the regime's imbecilic stolidity.

We can see the deep suffer of the Iranian people. The news of the workers who committed suicide at workplaces are reflected in the social networks of the Iranian workers' movement.

It is a strong salute that the Haft Tappeh workers in Iran re-fight in this period when organized forces should come to the fore!

It is precisely in this period that organized forces must come to the fore: the Haft Tappeh workers in Iran deserve a vigorous salute and solidarity!

Why the US reduces its presence in the Middle East? - V. U. Arslan