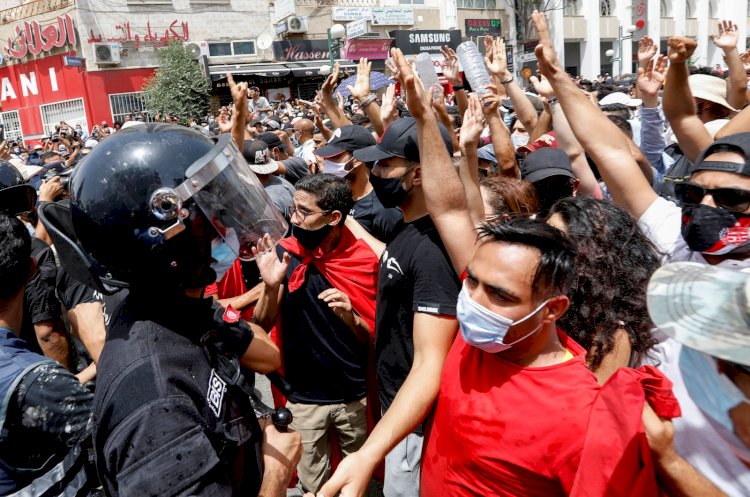 Tunisia, where the Arab Spring was started, is going through a new turning point. President Kays Said announced on Sunday that he had dissolved the parliament, citing the "extraordinary conditions the country is in", that the immunity of the deputies was lifted and Prime Minister Hisham al-Mashishi was dismissed. After Said's decision, Rashid al-Gannouchi, the leader of the political Islamist En-Nahda and the Speaker of the Assembly, described the events as a coup.

What was the story behind?

When Zeynel Abidin Ben Ali, who had been ruling the country with an iron fist since 1987, was overthrown by a popular uprising in 2011, Tunisian workers hoped that the economic and democratic problems that had accumulated for decades would be resolved, but in the intervening decade, little of their expectations came true.

In Tunisia, which has been under the influence of deep economic and political instability for the last few years, one of the most feared issues for the ruling classes was the possibility of social unrest turning into a new explosion. The conditions that triggered the rebellion in 2011 still exist, especially with the effect of the pandemic. The 2011 riot broke out when an unemployed young man, Mohammed Bouazizi, set himself on fire. Although youth unemployment in the country has decreased compared to 2011, it still hovers around 35%. General unemployment has increased in the last year, approaching 18% with the effect of the pandemic.

One of the most unsuccessful areas of political subjects who came to power since 2014 is creating a solution to the unemployment problem. In this process, the austerity measures imposed by the IMF, which were applied to solve the economic problems, have only aggravated the problems of the working classes. While a 2.8-billion-dollar loan agreement was signed with the IMF in 2016; one of the first demands of the IMF was the freezing of the wages of public workers, who were shown as one of the main reasons for the budget deficit.

Tunisia was shaken by a general strike in 2019, in which public employees participated heavily. 670,000 public employees went on strike demanding higher wages; especially in the railway, air transport, health, and education sectors, the wheels were completely stopped. The strikes witnessed the most massive participation after the actions that followed the assassination of opposition leader Şükrü Belayid in 2013. After the strike, an intense street movement against the current administration arose; the country's largest trade union confederation, UGTT (Union Générale Tunisienne du Travail), played a key role in the current political crisis, also played the role of keeping the movement within reasonable limits. Nida Party and En Nahda, which shared the power, took a hard stance against the street movement that emerged against the economic crisis. Although the bourgeois political subjects took different political positions, the radicalism of the street movement forced them to unite in class enmity.

Although the Presidential and parliamentary elections held in October 2019 witnessed efforts to resolve the political crisis, it should be noted that this has not been achieved in the two-year period. The decline in the voter turnout from 69% to 41% in the five-year period revealed how much the expectations of the masses from the current actors had fallen. This rate decreased to 9% when the population between the ages of 18-25 was considered. The government, which was established under the leadership of Ilyas al-Fahfah in February 2020, could only stay in office for 6 months in the current crisis environment.

Al-Mashishi, who took office after al-Fahfah, confronted with the problems that aggravated the pandemic. In July, Tunisia had the highest number of cases since the beginning of the pandemic; the health system has failed. On the 20th of July, Health Minister Fevzi al-Mahdi was dismissed due to intense criticism. In the name of fighting the pandemic, Kays Said especially contacted Saudi Arabia and asked for help. The government's failure in the face of the pandemic had triggered radical street protests in many places.

Here is what President Said meant by the “extraordinary conditions” the country is in: the possibility of an impending social explosion. Although, in Turkey, the issues in Tunisia are quickly described as a coup against the Muslim Brotherhood with the help of the UAE. What Said actually did was to prevent the regime from being dragged to teeter.

However, the elimination of Ennahda from Tunisian politics will only be a temporary solution for curbing social opposition. It was clear from the beginning that political Islamism, symbolized by Ennahda, would have a conflict with the Tunisian society, which has a strong secular camp. Assassinations against important opposition political figures such as Şükrü Belayid and Muhammed Brahimi, as Salafism started to gain power, reinforced the anger against Ennahda in society. On the other hand, although Nahda followed a conciliatory path with secular elements, starting with the tragic collapse of the Brotherhood regime in Egypt, it raised suspicions on many contradictions, from corruption to its role in covering up political murders.

As a result, after the Arab Spring, the example of Tunisia began to be torn apart. In the beginning, it was polished as an example of democracy for Arab regions. While the problems of the working classes in the country are getting so heavy that no current actor can handle it, the relationship with the IMF or the Gulf regimes only aggravates these conditions.

Tunisian workers have two options before them: either they will create an equal and free future with their own hands by overcoming the obstacles standing before them with an independent class line or being doomed to lose again and again in the internal struggles of the ruling classes. It should not be forgotten that Sisi's coup in Egypt did not only crush the Muslim Brotherhood but also crashed all social opposition. As soon as the ruling classes resolve their internal conflicts, they will look for an opportunity to silence the social opposition.