Long live the comradeship of all workers against the trap of the bourgeoisie! – The Voice of Revolution Statement on the replacement of workers who want to organize with workers imported from abroad 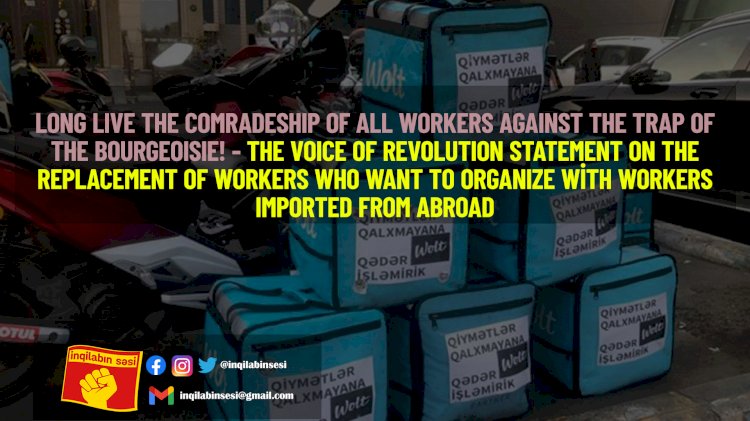 The replacement of workers in the delivery and taxi industry with their imported counterparts in order to halt their recent efforts to join forces and resist through unionization should be on agenda.

As The Voice of Revolution, we state that these attempts to prevent strikes and victimization of Pakistani, Sri Lankan and other foreign workers by international companies operating in Azerbaijan in workers’ pursuit of a better life are unacceptable. The direct culprit of all these violations is the transnational corporations that conduct their PR with a small part of the income they acquire from labor exploitation, and the YAP bourgeois regime, which gives maximum freedom and nearly serves the country in plate to corporations by adopting reactionary laws such as "The suspension of inspections carried out in the field of entrepreneurship".

So, what is this law?

On October 20, 2015, the bourgeois parliament, which acts only as a notary body, adopted a law that was approved by Ilham Aliyev. According to this law, with exceptions, (tax, customs audit, quality inspections of medicinal products, etc.) law inspections in entrepreneurial activities became prohibited. This law, which aims to "stimulate entrepreneurial activity", does nothing but obstruct the protection of workers' rights.

Thanks to this law, the "State Labor Inspectorate", which was created to protect the rights of workers, without a complaint cannot inspect any institution, and even if it does, it can’t have any legal consequences. Instead, entrepreneurs can comfortably continue their activities and exploit employees, intimidate employees who have the potential to complain, and carry out “dark PR” against those who complain.

What is to be done?

We must fight together against international companies, Azerbaijani authorities, local bureaucracy, and the bourgeoisie! We must fight for the organization of workers!

Our foreign comrades also work with the hope of prosperity, just like Azerbaijanis, and the blessings of these lands are enough for all of us to live and prosper. It is also necessary to organize foreign workers against the main enemy, the local bourgeoisie. The answer to this method, which has been used by capitalists for centuries, must come from joint forces of workers from different nationalities. The owners of capital use this strategy both to suppress the class consciousness of the workers and to misplace class-related anger. When fighting against the attempts of the bourgeoisie to divide the working class, we should not fall into the trap of nationalism that the bourgeoisie has been using for years, we must recognize the true enemy and fight together!

Long live the comradeship of all workers!