Azerbaijani workers should stop this game!- The Voice of Revolution's statement regarding the tension with the Russian peacekeepers 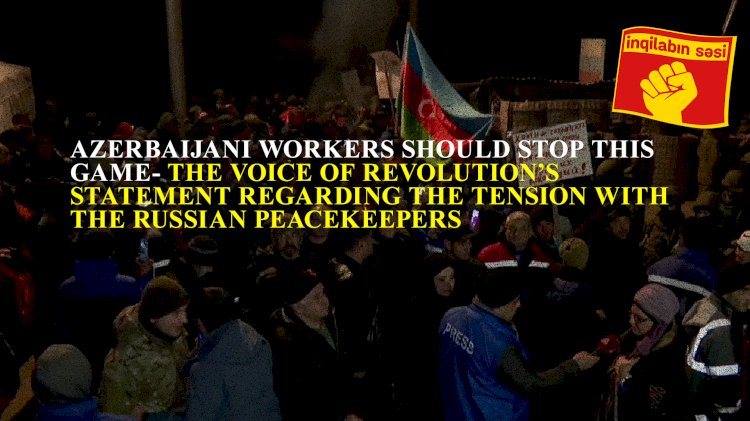 There is always one card that Aliyev uses when he is in a difficult situation against rising prices, workers’ dissatisfaction with working conditions, and people’s dissatisfaction: to inflame nationalist and chauvinistic feelings among the people by creating a war atmosphere.

One of the local television channels, which serves as the unofficial “language” of the government, said, “It is clear for everyone that Armenia’s territorial claim continues to our country. This means that there is one way in front of Baku: a new war!” These kinds of statements were expressed openly. Aliyev’s request for “ monitoring the illegal exploitation of mineral deposits by Russian peacekeepers and Armenia and the resulting environmental and other consequences” has not been fulfilled yet. Puppets of the Aliyev regime were brought to the area first under the name of journalists, and then under the name of eco-activists. People living on the border and brought there in pre-planned shouted nationalist and chauvinist slogans in front of the Russian peacekeepers, and they did their best to create an atmosphere of “patriotic nostalgia”.

Workers should not trust these games

Aliyev regime says, "Azerbaijan is ready for a new war." But, does Aliyev know how the workers manage their daily life after the second Karabakh war? Does Aliyev have information about how an employee who receives a minimum wage of 300 manats ( currency of Azerbaijan) takes care of his family? The largest part of the employees in the country, namely, 21.3%, receives a salary of 250-300 manats. Is Aliyev aware of the rising employment in youth and unemployment among recent graduates of universities? Aliyev can rely on the weapons which he bought from Israel, Turkey, and other countries, at the expense of the investment he earned via the sweat of the working people and obtained through corruption. However, the working people do not want to begin a new imperialist war under the regime of Aliyev. During a new war, young people will die on both sides, mothers will cry, and children will be orphaned. Soldiers who are buried in the ground will be the workers of Armenia and Azerbaijan, not puppets of Aliyev and the rich of the regime! In front of the imperialist interests that are destroying Armenians and Azerbaijanis and the nationalistic feelings that they are stirring up, the workers of Azerbaijan and Armenia should unite and turn the weapon to their enemy class and the governments that pursue their interests!

While the workers suffer from the pain of how to continue their lives tomorrow, Aliyev's war slogans and inflaming chauvinist feelings among the people are just a trick of the regime that forgets the real situation in Azerbaijan. This trick is created by the exploitation and corruption of the Aliyev government. With its expansionist policy, the Aliyev regime, which makes hatred among the workers of Azerbaijan against the working people of other countries, is trying not to turn this hatred into its regime and himself. They try to reconcile the capitalist class and the working class, whose interests are totally opposed to each other,  by imposing missions such as "protecting the interests of the country" on the working class. The response of the workers to this trick of Aliyev should be an organized movement for the struggle against Aliyev! The revolutionary socialists of Azerbaijan exposing the true face of Aliyev's regime and capitalist barbarism should call for "class war against imperialist war"!

Long live the union of Azerbaijani and Armenian workers!