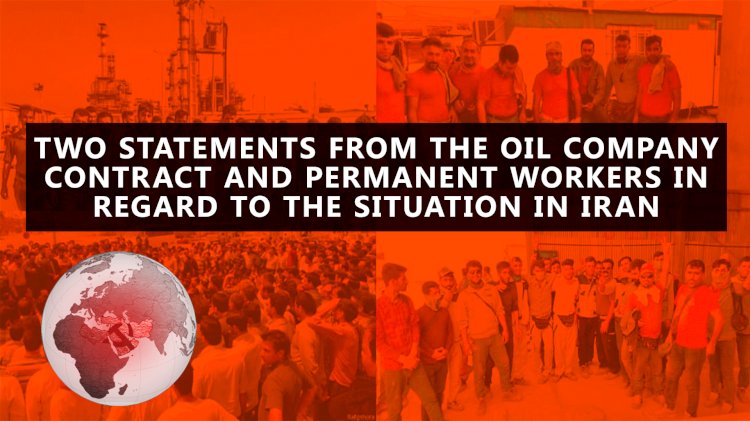 We have received two statements from the oil company contract and permanent workers in regard to the situation in Iran.

The game is over!
We said, there is a limit to our tolerance, we said take the cotton out of your ears, we said and you didn't listen, we will become a flood wave now that will take everything with it; destroying and ruinous.
So, we are not supposed to burn like a flame and burn alone, we will become a flame that needs to be extinguished by your tears. Ten years and 245 days have passed since May 8, 2012, that the Article 10 of the Law on Duties and Powers of the Ministry of Petroleum was approved. We have experienced the Black Saturday of 2022, we have passed December 17, and it is time for us to float the roots of your lies on the sea of your shameful disgracefulness. January 17, is the final day. Look forward to the ripping flood carried by the brave men of the oil industry. So far, we have given everything we had, sincerely and honestly, putting our hearts into a production that has put its profits in your pockets, and brought empty tables, pollution, disease, and troubled souls for us and our families. Take turn games. We are no longer going to be held accountable to anyone.
Now, this is the bullet and the battlefield
Our date is the 27th of January
Once and for all
Everywhere: Tehran, Ahvaz, Asalouye, Mahshahr, Gachsaran and all oil-rich and operational areas
The Coordination and Solidarity Council of the official employees of the oil industry
Wednesday, January 11th, 2023
Allied workers

The statement of the Coordinating Council of Oil Contract Workers on the  current serious situation in Iran:

We have been fighting a hard battle to defend our lives, livelihoods, and human dignity for more than a hundred days.

The murder of Mahsa Amini has sparked the anger and hatred of our people.

We came to the streets in defense of our lost lives and our human dignity, but they answered us with bullets and prison.

Prisons are filled with our beloved young people. In the same period, about 600 people have been killed by shooting or in prison as a result of being tortured. Among those who are killed, are teenagers and even a ten-year-old child, like Kian Pour Falak. Repressive forces are all over and patrolling the streets. In addition, tens of thousands of people have been arrested during this period, and the government has treated the arrestees as prisoners of war, and the tortures, rapes, and silent death of the prisoners, have brought the repression to its highest levels, and the government is issuing more and more death sentences every day. For example, since December 8, four young protesting revolutionary workers named Mohsen Shekari, Majid Reza Rahnavard, Mohammad Mahdi Karmi and Mohammad Hosseini have been executed, and we have emphasized that the answer to these executions and repressions is the spread of nationwide protests and strikes. In addition to these repressions, the lives and the livelihoods of our workers and people are being looted and plundered more and more each day, the poverty line has reached 30 million, and the dimensions of poverty, hunger, lack of housing, and displacement are catastrophic.

We, the workers, from poverty and living below the poverty line, and in insecurity, receiving a pittance in wages, of running every day after receiving our unpaid wages, and the road closures, of the bullying of the contractors, and finally pulling the body of our fellow worker out of the melting furnace, are at the heart of the rebellion, and this situation is no longer sustainable for anyone. Livelihood and dignity, are our inalienable rights.

Mahsa Amini, this young girl who had a thousand dreams, was arrested and killed just because of the compulsory hijab. Many women have lost their lives because of this offense and their lives have been put in danger, they have been imprisoned, and are currently in detention. All these oppressions, discriminations, and crimes against women must be ended and these are all the common pains of us, the people, who came to the streets and shouted all our pains and the slogan of women, life, freedom, and this is a movement that will not stop.

We are not slaves to witness the exercise of power and will from above our heads, over our work, and over our characters and way of life every day. We in a real sense want freedom, prosperity, and comfort.

Unity, solidarity, and the unification of us, the people, will get rid of this situation!

Today, the time has come for all of us, the workers, teachers, retirees, youth, students, women's and children's rights defenders, LGBTs, environmentalists, and we all the fed up and protesting groups, to come together, form a single line by uniting around a series of urgent demands, and build a strong fortress for the next steps and final victory.

In connection with the current serious situation, the Coordinating Council of Oil Contract Workers for the organization of protests of oil contract workers emphasizes the urgent demands stated here:

The organizing council expects oil workers, and all workers, teachers, retirees, students, women's rights defenders, and children’s rights defenders to declare their support for these demands and form unity and solidarity based on the slogan of women, life, freedom, and join us.

1-"Freedom, freedom, freedom" is our slogan and we demand the immediate and unconditional release of all those arrested, all people who are in prison for their beliefs and protests, and an end to the security charges against opponents and protesters under the headings of waging war on God and State, disruption of order and security of the society, and these sorts of accusations.

2- "Woman, life, freedom" means ending reactionary "execution" orders, with no conditions. All death sentences must be immediately and immediately revoked. And as we wrote and shouted in another place, execution is a State-sanctioned killing, and no human being should be executed for any reason. We want the complete abolition of the death penalty.

3- We want all oppression, humiliation, and discrimination against women and gender apartheid in society to be ended. In addition, we are for the separation of religion from the state and the administration of society. From our point of view, the official religion is a form of dictatorial action against the society and we have experienced its disadvantages well. Humans can have any kind of religion or no religion at all, and recognizing this principle is an important condition for freedom of opinion and expression in society.

4- The freedom of protest, assembly, strike, demonstration, and unconditional freedom of speech and thought are the basic rights of our people, and they should be recognized unconditionally. The labeling of struggles and the phenomenon of political crimes, prison, and political prisoners based on security charges must be put to an end.

5- Kurds, Baluchis, Azari, freedom, and equality are our protest slogans against discrimination, inequality, and any ethnic divisions. We demand the reorganization of the equal rights of all the citizens of the country regardless of their beliefs, religions, ethnicity, gender, or sexual orientation, and the elimination of any civil, economic, and class discrimination and inequality.

6- We do not tolerate the exertion of any kind of power from above our heads either in work or in life. We desire that the council and collective management of society be the governing form of our society. The Declaration of these minimal demands is the first step in exercising the collective will of our people in uniting and shaping our destiny and future. Participate in the alliance around the demands announced in this statement and join us.

Our emphasis is still on the nationwide strikes.

The Syndicate of Workers of Tehran and Suburbs Bus Company...