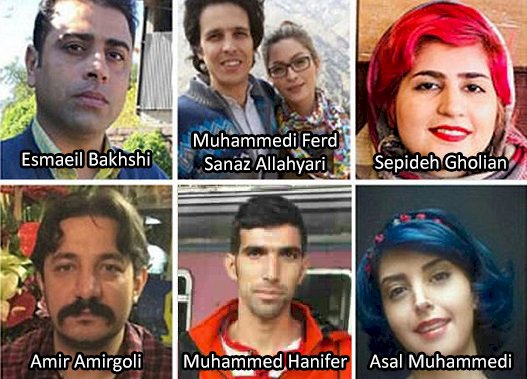 In Iran, the mullah regime has given heavy penalties to the workers of the Haft Tappeh sugar cane factory and supporters of their struggle this week. Worker leader Esmaeil Bakhshi was sentenced to 14 years in prison, Muhammad Hanifer 6 yeras ,   five socialist journalists were given 18 years!

As pointed out by our Iranian comrades, these punishments mean the severe punishment of the demand for “work, bread and freedom!!
The regime in Iran continues to rule over the brutal exploitation of millions of workers. Large masses of laborers are forced to live in poverty or even in hunger. Those who rule the country economically and politically have established a system of rent and debauchery through this exploitation.

Moreover, because the democratic rights were suspended and freedoms had been oppressed, the exploited masses had been sentenced to silence for years.

However, especially in the last two years, the social explosions in the laborers and the youth masses have annoyed the Iranian regime. Since December 2017, public protests across the country, even in the most conservative areas, have shown that things will not easy fort he regime anymore. Following this wave of protests, proletarian masses in many sectors also started workplace struggles.

In this process, Haft Tappeh workers provided an embryonic example of an alternative to the solution of both economic and political problems: the elected worker councils! As a matter of fact, Haft Tappeh workers  were greeted and supported by thousands of workers in many sectors.

We cannot ignore the fact that, for now, In İran, political forces of the working class is weak, so does the socialists. But establishment of such force can only be achievd through and in the struggles.  So it is not in vain that the exploiter class of Iran is so frightened by the Haft Tappeh struggle and the fact that this movement unites large sectors of society!

However, the fact that hundreds of workers are still taking action at the Haft Tappeh factory when these brutal prison sentences are given shows that the regime's oppression mechanisms cannot stop the class struggle.
The Iranian working class and youth must continue to struggle despite the severe obstacles and threats in the movement. And it does!

We, revolutionaries and laborers from Turkey, salute those who fight under the most severe conditions in Iran!

We remind that we stand by our Iranian friends and comrades in the struggle to overthrow the regime of exploitation and oppression!

March 8: Women’s Struggle for Equality and Socialism in Turkey

Death to the Mullah's Regime! For the Socialist Middle...