ISL Declaration: The Zionist State will be destroyed and a socialist Middle East will rise from its ashes 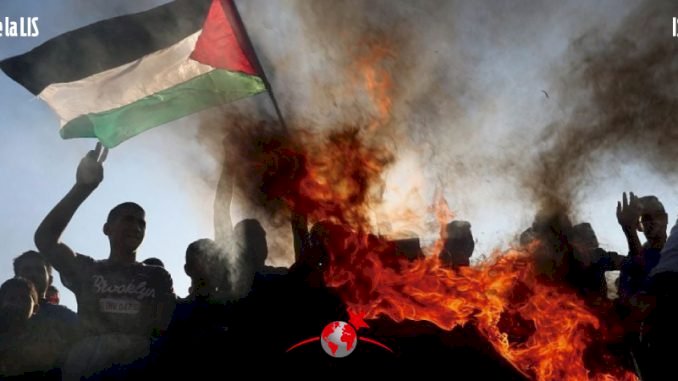 The Palestinian people are resisting a new offensive by the genocidal State of Israel since the beginning of Ramadan in April. The Zionist offensive intensified with police repression since May 7, a brutal attack on the Al Aqsa mosque on Monday the 10th and the bombing of the Gaza Strip starting in the early hours of the 11th, which has so far resulted in the death of 53 Palestinians, 9 of them children.

Behind the offensive is the Zionist attempt to evict Palestinian families from their homes in the Sheik Jarrah neighborhood of East Jerusalem. Israel accelerates its steps in line with its plan of not leaving even the slightest living space for the Palestinians. Now it moves forward trying to disrupt the population structure of the city of Jerusalem.

However, Israel´s efforts to force the Palestinians out of Sheik Jarrah and replace them with Zionist settlers met with fierce resistance from tens of thousands of Palestinians. The fight against the expulsion of Palestinian families from their homes has continued for weeks despite attacks by Israeli police and far-right settlers.

From the beginning of the holy month of Ramadan, Israel blocked access to Jerusalem’s central square where Palestinians congregate at the end of daily fasts, starting two weeks of clashes that lasted until the Zionist police had to back down from the measure.

On May 7, the Israeli forces charged again, repressing thousands of Palestinian families who were praying in the vicinity of the Esplanade of the Mosques; They repeated the attack for the next two days, wounding hundreds of Palestinians who resisted as best as they could.

The repression was intended to clear the area for the “Jerusalem Day” march to pass, in which the Zionists celebrate their invasion of East Jerusalem in 1967. But the Palestinians resisted the assault and despite the repression they prevented the eviction of the esplanade, forcing Netanyahu´s government to divert the Zionist march.

On the morning of Monday the 10th, the violence perpetrated by the Israeli police brutally continued in the Al Aqsa Mosque, the spiritual center of the Muslim community in Palestine. They fired indiscriminately, even inside the mosque with rubber bullets, tear gas and sound grenades.

And this Tuesday the 11th, the criminal action continued with an intense bombardment in the Gaza Strip that has left dozens of deaths and that the racist and murderer Netanyahu threatens to intensify.

Many Muslim states symbolically condemned Israel’s attacks. Among them are the Arab puppet states that have made friendship agreements with Israel, and Turkey under Erdogan, who is working hard to establish relations with Israel.

The International Socialist League repudiates this new criminal aggression by Israel and we call for the broadest international mobilization and solidarity in support of the Palestinian people.

Once again it is demonstrated that no solution is possible without the destruction of the genocidal State of Israel. Until Israel collapses and imperialism and its collaborators, the local despots, are defeated, neither the workers nor oppressed nations like the Palestinians can be liberated.

The International Socialist League defends the right to a single, democratic, secular and non-racist Palestine, with Jerusalem as its capital. The only reassurance for the oppressed peoples is socialism.

That is why we have to light the fire of revolution in the Middle East and around the world. If workers, the youth, women and oppressed peoples unite and fight against imperialist capitalism, then we can enjoy a free, happy and equal life.

Long live the heroic resistance of the Palestinian people!